The Captain Marvel movie already took the fan’s breath away and the appearance of Danvers only added to the intensity of the thrill and excitement.

Since the release of the movie, Captain Marvel has been one of the most popular cosplays from Marvel. The appearance of Carol Danvers in the Avengers Endgame movie has made the character a favorite among female cosplayers.

Cassida Kahler known as cass_play on Instagram is a versatile cosplayer who does different female cosplays. She does cosplays from Marvel to DC to even Disney. She is best known for her Captain Marvel cosplay.

Apart from a cosplayer, she is also an actor and a model which you can find on her official profile other than the cosplay profile.

You can also find her work on Ko-Fi here and support her for her awesome work.

She is a Captain marvel cosplayer and she just looks the “fiercest” and also fierect in this cosplay image.

You won’t find much cosplays other than Captain Marvel on her profile because she is more of a fitness professional and a model but yeah loves to do Cap marvel cosplay and does it so well.

Allison cosplays with Adam on Instagram with the username couple2018. You can see them cosplaying both solo and together on their IG profile.

Alison has done some insanely cool shots as Captain Marvel on Ig and the one shared above is one of them.

You can also find them on Ko-Fi. The best part about their cosplay  is that they also do charity and fundraising events together while cosplaying.

She is a rising cosplayer from Ukraine. Her name is Eria Dragon which is written as Эрика Дракон in Ukranian. She not only does superhero cosplay but also anime such Asuna Yuuki. Her Captain Marvel cosplays are one of the best superheroes cosplays on her profile.

She is also a writer and writes thoughtful pieces in Ukranian which are published here. However, you can translate them online and just enjoy her beautiful literary work.

The Captain Marvel cosplay you’ll witness on her profile won’t be from the recent Marvel movies but rather the comic version.

The costume is nicely made and the graphics add to the beauty. She is a natural blonde so she doesn't need any wigs to style her hair like Carol Danvers. She is also known for her Harley Quinn Cosplay and Gwen Stacy.

Brie the Cheese is her nickname on IG. She is a rising cosplayer on Instagram and does pretty versatile cosplays. She does stuff from Disney such as Flynn Rider to Marvel such as Lady deadpool. She has even done genderbent cosplays like shazam and spidey. She is mostly known for her Jedi Cosplay.

She is a model as well as a member of different cosplay promotion pages. You can even find her on Ko-Fi and she is also cast ember of a fairy visits company in Pittsburgh called the FairyTales Visit.

Yeah, she is the armored Cap because that’s how her fans know her. Although the captain marvel cosplay doesn’t have any armor requirements, Kirstin has a hell lot of armored cosplays, which is mostly created by Kirstin herself.

Her portfolio is very rich and you can see cosplays ranging from Captain Marvel soaring in the sky to Mera ruling under the sea.

She also does genderbent cosplays such as Shazam, Spidey, Captain America and many more.

Her Ciri cosplay from the Witcher was so awesome that it was even featured in  the giant comic blog called ComicBook.

Her Captain Marvel cosplays are no different and that’s why they’ve got onto our blog.

Her work is just unmatchable be it any cosplay.

Samantha is a popular cosplayer from New York. She mostly does Marvel cosplays but also does DC like power girl and Disney like Jasmine. All her cosplayers are just awesome and she does each of them with great precision and dedication. She is also a member of age local non-profit organization called the Avengers of New York for charity events and hospital visits by a group of marvel inspired cosplayers.

She is a popular creator on Ko-Fi too and also has interest in Aviation and Aerospace.

Captain Kaycee cosplay is another well-known name in the industry of cosplay when it comes specifically to Instagram. Although she has been cosplaying since 2011, she has been active on IG only since 2018 and in a span of two years she has done a remarkable job gaining over 50,000 cosplayers.

She is based out of Nevada and travels throughout the country to attend conventions. She is a guest to many conventions in the United states.

She has been featured on major websites such as IMBD, variety magazine and has won awards for her cosplay at conventions such a s the 2017 Guild award Wondercon. She has also worked with cosplay sites such EZ Cosplay and Procosplay to inspire everyone to cosplay. Apart from that she has also worked with Besame Cosmetics featuring Disney & Marvel vintage makeup products. She is best known for her. her cosplays of Hela from Thor: Ragnarok, Mera from Aquaman, and Black Widow from the Avengers.

She actively promotes positivity in the cosplay community.

She also has her own store on Etsy where she sells cosplay prints and stuff.

And finally the most fiercest Captain marvel cosplayer is here and we would say  she is just a cutie in a mask.

However, dare not take her cute face as her weakness. She is our fiercest Captain Marvel Copslayer and one punch in your face would be enough for you to fall down.

Better watch out before messing with her. You can catch up with her in Wondercon and maybe get a hug (of course if she wills to)

Her Star Wars cosplay and Games of Thrones cosplay are equally fierce with the sword in her hand almost equal to her own size. So, better watch out. 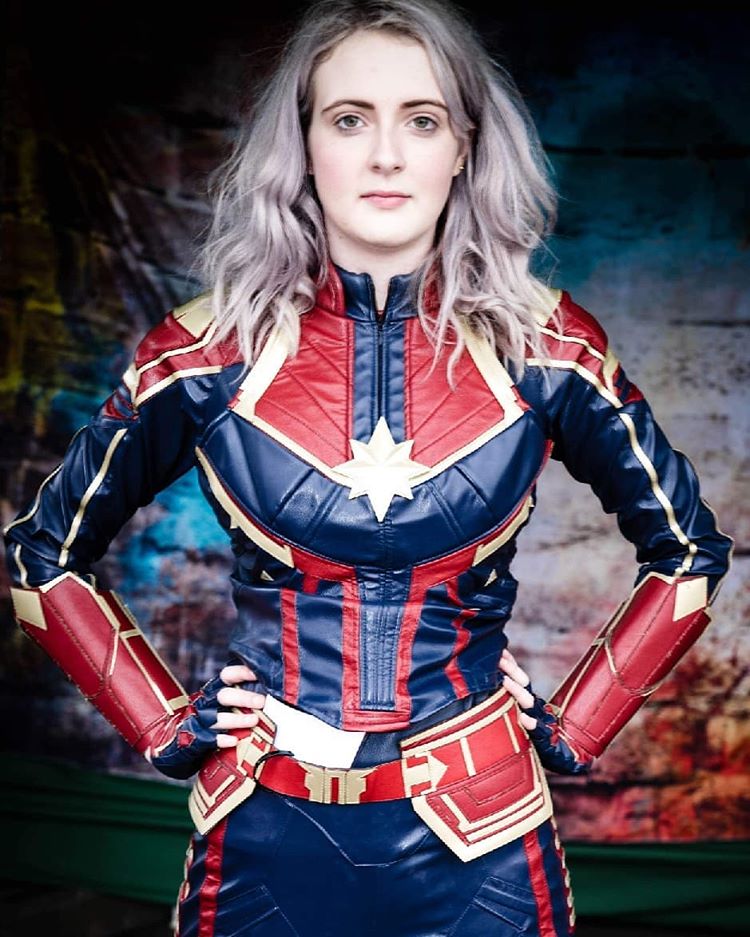 Eleisha is a young and rising cosplayer from Aussie but her work is extremely professional. Captain Marvel is one of her most favorite cosplay characters but she also does other female characters extremely well.

She is also one of our returning customers and this suit donned by her is proudly made by us. She is also member of the Cosplayer for the United Heroes Supporting Real Heroes group and does commendable work.

So, those were 10 fiercest Captain Marvel Cosplays you should be following on Instagram. Do share this post, if you feel it can help you and your cosplayer friends. Let us know in the comments section below which one you find the most fiercest.